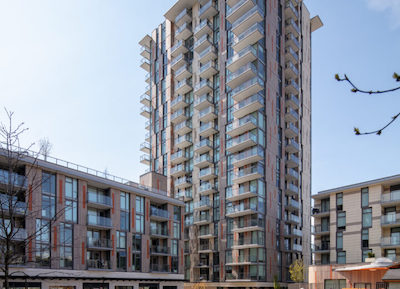 Longtime Vancouver developer Gino Nonni returns to his family roots with the rebranding of Serracan Properties and the launch of Nonni Property Group.

The Western Canada Development Corporation, which has landholdings in British Columbia and Alberta, is continuing to expand into purpose-built rental space as part of its rebranding.

Nonni founded Serracan in 2000 and recently sold his office building at 510 Seymour St. in downtown Vancouver where the company is headquartered. The company remained as tenants.

The company has also redeveloped a major 1.77-acre mixed-use site on the south bank of the Fraser River called Fraser Commons – the former Blue Boy Hotel – at Southeast Marine Drive and Fraser Street.

For the past few years this has been a tired looking 100 room Super 8 hotel.

It was a long and complex process. Serracan had purchased the South Vancouver site in 2013 and embarked on a rezoning application to build 363 condo units with a two-level commercial plaza, a large central courtyard, a 37-seat daycare center and retail on the ground level.

It then sold some commercial space in strata and retained ownership of all retail, for rent, and 22% of residential units for rent.

Residential leasing is a key part of Nonni’s future strategy, in an environment that has seen interest rates rise and rental rates climb.

“We ended up keeping a bunch of units for rent because we felt it was a good long-term catch for our organization, which is one of our requirements,” said Nonni, Founder and CEO of the society. “We’ve developed (properties) to sell, but we’re also developing to hold, or, as a hybrid, we can develop something and hold part of it to rent out, and just rent it out and hold it for a stream of long term cash purposes.

“But our philosophy as a family business – and we’re a private company and we have the benefit of making these decisions independently – is that if we feel it’s the right decision to keep something for sustainability longer term and for financial betterment, then we will.

Serracan also has other residential sites planned in different areas, still in the rezoning phase and too early to talk about them publicly.

“(Residential) is an integral part of the rebranding. We decided that we were entering a different cycle. We decided to go back to our roots and use Nonni, my surname of course, as a brand. I’m old and I’ve been here a long time,” he laughed.

“Serracan was really a holding company and we ended up using it as a development platform that started many years ago.

“In terms of our development operations, we focus on multi-tenant residential rental and purpose-built industrial developments for retention purposes, for rent. We currently have holdings that are somewhat ripe for new products. . . in other words, tearing down the old product and building a new one on the site.

About half of its assets are industrial properties. Industrial is a “pretty conventional”, multi-tenant, smaller-bay product that is already part of the portfolio, he says.

The company is considering residential rental projects in Calgary and the Lower Mainland, and not necessarily high-rise concrete buildings, but six-story buildings, for example, Nonni said.

“The residential part of our business started with Fraser Commons in terms of rentals (units) because we decided to stick with it,” he said. “The balance (residential) is going through developments in the planning phase at the moment. We probably have something like 400 units in the planning stage, but not yet zoned, so over the next 24-48 months. . .”

Many of Fraser Commons’ pre-sale buyers were a new type of investor – parents who intend to rent the units until their children are grown and can support them.

“We were very happy with that and the fact that we ended up renting a lot of units in less than four months. The rental market was very strong and we were delighted and surprised that it was as strong as it was.

Sale of offices in Vancouver

He purchased the site for his future mid-rise office at 510 Seymour St. along with the old hotel site, in 2013.

Two former commercial buildings had occupied the corner of downtown for decades. With a floor area of ​​8,400 square feet, Serracan has developed a glass-encased jewelry box of a building, with Adler University as its anchor tenant.

Because it was built as part of a partnership that was coming to an end, Serracan put the building on the market a few months ago when they intended to keep it.

“We had several offers,” Nonni said, “and we sold through a Canadian company to a European family. I am under confidentiality in terms of the purchase price, but it was competitive in the final negotiations.

“The buyer he ended up with was very happy. And we were very happy that of all the office properties available around the world, they chose Vancouver and they chose our asset.

“They have a big advantage in terms of increasing medium and long-term rental rates. They will do well to stick with it and move on.

The level of interest from institutional and global investors and others shows that the fundamentals are there, he said.

“I think the market is interesting right now. It’s expensive in Vancouver, and I think developers with historic land values ​​will be at an advantage, especially if they want to build on it,” he said. “I mean, we just sold an office building to a European family.

“It’s really interesting, isn’t it?” When you step back and think about it, there are a lot of pension funds invested in this city.

“And when you look at the amount of capital invested in real estate and ongoing infrastructure as well, you really have to understand that there’s a base of strength that doesn’t go away.”