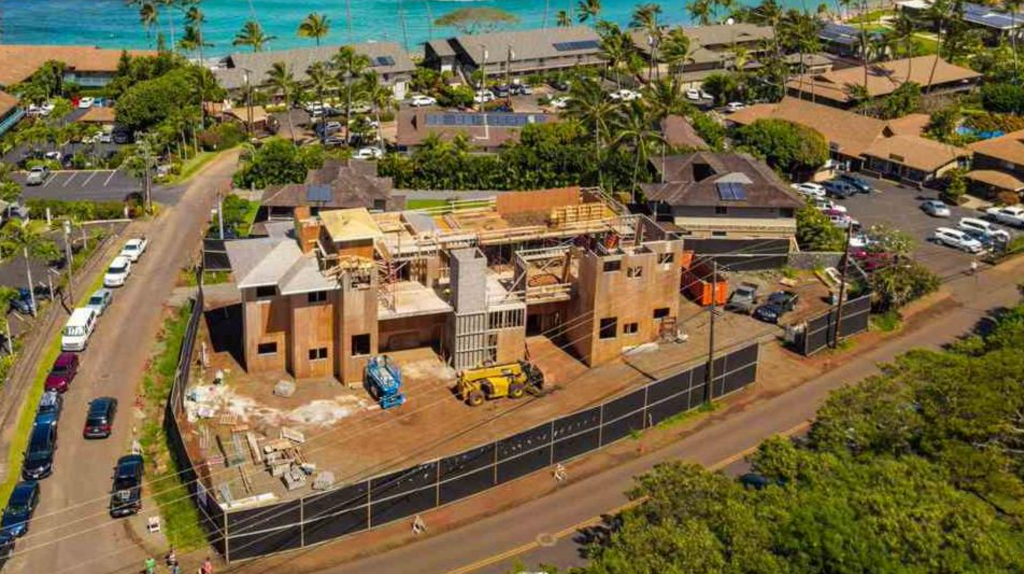 The construction of a large house in Nāpili, Maui, remains at the center of an ongoing dispute over its permits and size, as well as community concerns over the height of the structure.

Today it is on the agenda of Maui’s Government Relations, Ethics and Transparency (GREAT) Committee, which may receive an update on the matter this afternoon, with a potential discussion focused on the authorization process and related concerns. The Committee is trying to determine if the plans were accurate and if the construction followed the plans.

The house is built by Greg Brown at 5385 Lower Honoapiʻilani Road at the corner of Hui Drive in West Maui. A special management area exemption has been obtained and building permits have been issued by Maui County.

According to documents, the property was originally purchased with the idea of ​​building a large vacation home for periodic use by Brown, his family and extended family with the idea that the home would be used as a vacation rental. when not in use.

Brown maintains that he notified the county in writing during the SMA licensing process of his intention to use the home as a transient vacation rental “as zoning permits” when his family was not using the property.

But according to timelines provided to the committee, the county informed the applicant on March 12, 2021 that the SMA exemption and building permit “did not contemplate transitional use of the vacation rental.”

The building’s height and intended use have raised concerns about what some have called a “monster house”, arguing that it violates the Nāpili Bay District’s two-storey limit.

According to Brown, he worked directly with the planning department for more than two years during the SMA and building permit review process, with concessions made as well as home design changes as requested. of the department. It said it would also provide four public off-street parking spaces along Hui Road.

A Maui County spokesperson responded to Maui Now’s request for comment regarding the project saying, “If there is evidence of a violation, Maui County will take appropriate action, which may include suspension or revocation of approvals.”

“If there are violations, the county may issue a warning notice or notice of violation, cancel or revoke permits, issue a stop work order, or take other action depending on the nature of the violation. violation,” according to a county spokesperson.

According to Brown, “county building inspectors have verified that the home is built according to approved plans,” with the most recent inspection and verification November 16, 2021.

It is also a landscaped wall, currently under review by the planning department. A building permit application was originally submitted for the wall, but Brown says he was told he didn’t need it.

In June, he was informed that the house according to county-approved building plans exceeded 35 feet, including an elevator and stairwells, but was no more than two stories, and therefore Brown supports that it complies with the zoning.

In an attempt to reach a resolution with the planning department and address community concerns, Brown said he had drawn up plans to lower the height of the house to 35 feet and voluntarily halted work for two month.

“Not being able to delay construction indefinitely,” Brown said, he was forced to continue building according to approved plans. “Reducing the height at this stage is not an option as the structure is now almost fully built,” he said.

Brown maintains that he is working in accordance with approved permits and “did nothing wrong.” He said, “There is no legitimate and legal justification to stop work at this stage, any further delay in construction will be particularly damaging.“