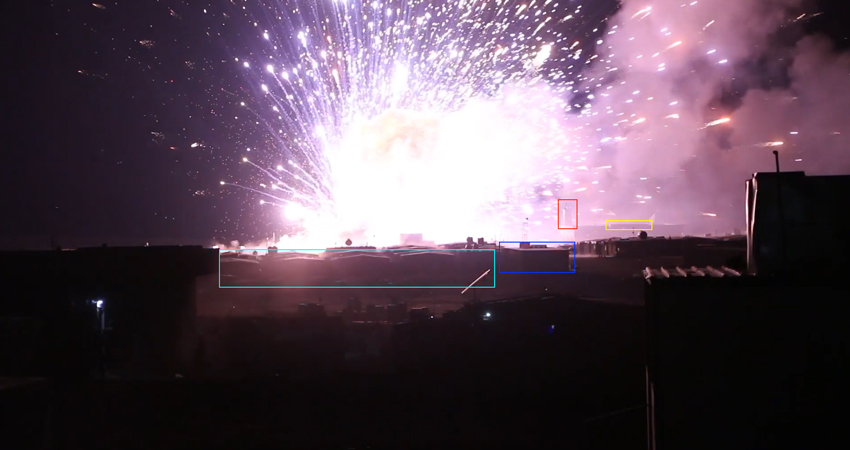 On June 1, 2022, at around 10:30 p.m., a huge explosion occurred in an arms depot of a military base of the Sham Legion/Faylaq al-Sham group of the Syrian National Army (SNA) in Babiska town, adjacent in Bab al-Hawa border crossing with Turkey.

The White Helmets, officially known as the Syrian Civil Defensereported that the blast continued for more than two hours and resulted in the death of a girl with special needs and a member of the Sham Legion/Faylaq al-Sham group as well as the injury of two civilians. Additionally, the blast sent shrapnel from rockets, explosives and ordnance that hit dozens of tents in IDP camps adjacent to the depot, prompting Civil Defense to evacuate at least 12 camps in the area.

Media sources reported that the explosion was caused by a drone attack. However, exclusive sources told STJ that the real cause was that weapons and ammunition were stored haphazardly in a depot without proper security measures.

It should be recalled that Idlib has already witnessed huge explosions in ammunition and weapons depots, as well as in explosives manufacturing plants located in residential buildings. These explosions killed and injured dozens of civilians. The highest number of casualties; however, there was the explosion of an ammunition depot in Bab al-Hawa, which took place on August 12, 2018. This explosion killed 67 people, including children and women, and injured more than 70 others.

Many Syrian armed opposition groups set up their headquarters and arms depots in civilian residential areas or near IDP camps to protect them from military operations. However, these groups do not take any kind of precautions to ensure the safety of civilians living near their military objectives.

To read the full report in PDF format, follow this link.

2022-07-15
Previous Post: Why Haight-Ashbury has the most Airbnbs of any residential area in SF
Next Post: National Car Wash Company pays $1.8 million for 2 sites