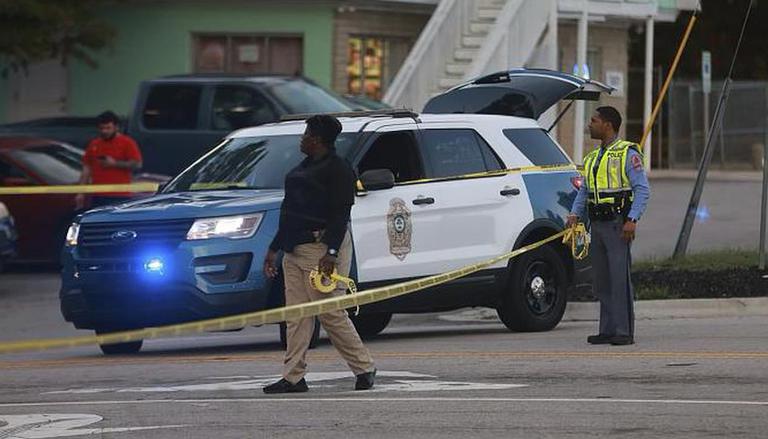 North Carolina: A shooter killed 5 people in a residential area, the suspect is “confined”, according to the mayor

A North Carolina mayor announced that five people, including a police officer, had been killed in a shooting in a residential area.

Raleigh Mayor Mary-Ann Baldwin told reporters that several people were shot on the Neuse River Greenway around 5 p.m. and that the police department told her around 8 p.m. that the suspect had been “contained in a residence in the region.

Numerous police vehicles and several ambulances had swarmed the Hedingham area from late afternoon, and officers remained in place for hours in an apparent manhunt. Details of what happened remained scarce as of the early evening.

“State and local officers are on the ground working to arrest the shooter and keep people safe,” Gov. Roy Cooper tweeted shortly before 7 p.m.

Earlier, WakeMed Hospital spokeswoman Deb Laughery said at least four people connected to the shooting were being treated at the hospital, but no further information was immediately available.

Police closed several streets in the area and numerous law enforcement vehicles were seen parked both on the street and in the driveways of two-story houses. The neighborhood borders the Neuse River Greenway trail and is approximately nine miles from downtown Raleigh.

The Raleigh Police Department said it was “at the scene of an active shooting” in a statement via Twitter, and advised residents in several neighborhoods to stay indoors.

Brooke Medina was driving home around 5:15 p.m. when she saw about two dozen police cars, marked and unmarked, speeding toward her neighborhood as she pulled off the freeway. She then saw ambulances rushing in the other direction, towards the nearest hospital.

She and her husband, who were working from home with their four children, began reaching out to neighbors and realized there was a shelter-in-place order.

The family closed all their blinds, locked the doors and gathered in an upstairs hallway, said Medina, who works as vice president of communications at a think tank. The family listened to the police scanner and watched local news before heading back down once the danger appeared to have cleared their home.

“We’re just going to hunker down for the rest of the night and be extra vigilant. Keep all our lights on, doors locked,” she said.

She described Hedingham as a sprawling, dense, tree-lined neighborhood that is full of single-family homes, duplexes, and townhouses that are more moderately priced compared to other parts of the Raleigh area.

Medina said she often takes her kids for bike rides along the greenway during the day, but usually brings pepper spray just in case.

“There are a lot of places where you could disappear,” she said.

(Disclaimer: This story is auto-generated from a syndicated feed; only image and title may have been reworked by www.republicworld.com)

2022-10-14
Previous Post: Canada Post officially launches national loan program with TD Bank Group
Next Post: North Carolina: A shooter killed 5 people in a residential area, the suspect is “confined”, according to the mayor