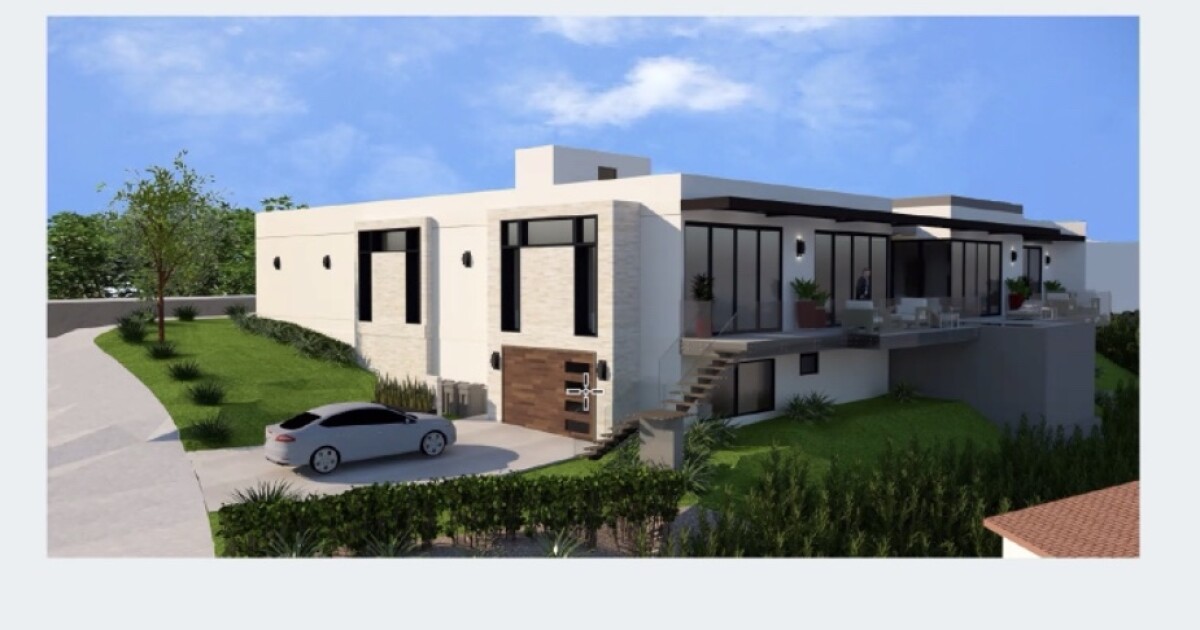 Plans to build a new 6,219-square-foot home on a vacant lot that once housed a historic home were approved by the La Jolla Shores Permit Review Board at its virtual meeting Feb. 22.

The two-storey housing proposal at 2382 Via Capri Court came with a review to amend the original permit.

The 2014 permit specified an addition to an existing single-family residence, said representative plaintiff Karina Diamond. But the word “existing” should be replaced with “new” because the historically designated house that stood there was illegally demolished, she said.

Diamond said the current owners purchased the vacant land, which came with the 2014 permit, in 2017, “unaware that there had been an illegal demolition of the existing home.”

Plans for the new house show a floor area ratio (the size of a building to its land) of 0.46.

Klemens Ruoss, the owners’ agent, said the land is currently for sale. The owners were “excited to build,” but permit issues put them off, Ruoss said.

He said they are still motivated to build if the project is approved.

PRC administrator Matt Edwards said he was concerned about the elevation on the north side of the land, where a swimming pool is planned. “It’s steep out there,” he said.

Trustee Janie Emerson also expressed concerns about the steepness of the north slope of the lot and the stability of the ground below the lot.

However, a motion that conclusions can be made to support the project passed, with Emerson opposing it and PRC President Andy Fotsch usually abstaining.

The proposal to demolish a 1,863 square foot single family residence and garage at 1851 Spindrift and construct a 2,924 square foot two story single family home with a 500 square foot garage and a 302 square foot accessory unit. he dwelling above the garage underwent minor modifications after the project was rejected in January.

The floor area ratio, which PRC administrators previously said was too high, fell from 0.86 to 0.79, according to plaintiff’s representative Haley Duke of Island Architects in La Jolla.

She added that setbacks have been increased on all sides of the property, with the biggest increase in the front yard from 10 feet to 12 feet.

The house, which will be made in a Spanish palette with wood, terracotta and natural materials, also contains “large openings”, such as covered terraces and sloping roofs, “therefore less wall on the facades “Duke said.

The house “embraces” the 30ft height limit at 29ft 11in at its highest point, she said.

“I love the project,” Emerson said. “I so appreciate you all continuing to work with this to try and get to a point where…everyone feels comfortable with it.”

A motion that conclusions can be made to support the project passed, with PRC Administrator Dan Courtney dissenting without comment.

8445 Avenida de las Ondas: The review of a project to add a secondary suite to a historic house continued until the next meeting of the PRC.

The proposed project for 8445 Avenida de las Ondas would consist of demolishing a garage and building a two-storey structure, with a “small guest bedroom, gym, bathroom, laundry room [and] very deep two-car garage” on the ground floor, said the plaintiff’s representative, Michael Morton.

The top floor would be a 1,191 square foot one-bedroom ADU for the extended family.

The original home on the property is designated historic, Morton said, and so his designs for the ADU follow the Secretary of the Interior’s Rehabilitation Standards, which state that “new additions, exterior alterations, or new related constructions must not destroy the historic materials that characterize the property. The new work should be differentiated from the old and should be compatible in volumetry, size, scale and architectural features in order to protect the historic integrity of the property and its setting.

“The idea is that they don’t want the new additions to look like the original historically designated structure,” Morton said, explaining the contrasting “light and natural colors” in the design.

PRC Administrator Larry Davidson said: “It looks so disparate from the original to the new build. … I don’t see the connection between the two buildings in the materials, the form, the form.

Emerson said “it is meant to be differentiated from the old, but must be consistent in mass, size, scale, and architectural features”.

“I have no problem with the size of this one… [but] it looks like two completely different buildings on the same property, and I think that’s not compatible with rehabilitation standards, she added.

Emerson said a change in color and materials could remedy that.

The PRC and Morton agreed to an extension. Morton said he would explore changing colors.

Next meeting : The La Jolla Shores Permit Review Committee will then meet at 4 p.m. on Monday, March 21, likely online. Learn more about lajollacpa.org. ◆