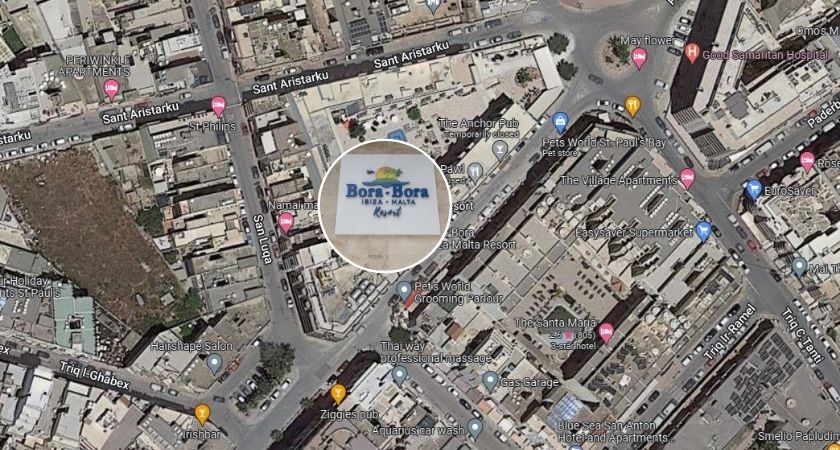 Residents of St Paul’s Bay are having to endure sleepless nights as a hotel in the middle of a residential area has been turned into a club.

The hotel in question is the Bora Bora Ibiza Malta Clubbing Resort, located on Triq il-Kaħli. The clubbing station was launched earlier this year. According to its website, it is “dedicated to providing a truly magical and unforgettable experience, full of the authentic essence of Ibiza to ensure that anyone looking to spend their holidays on the beach in the sun and still close to the music they enjoy and the best crowds you can be in.

Formerly known as Pebbles Resort San Pawl, the resort has been transformed into Bora Bora Ibiza Malta. The hotel is operated by Pebbles Resort Ltd, a company ultimately controlled by Joseph and Josephine Casha, also shareholders in the company that owns Med Asia, which operates several restaurants and beach clubs.

A resident who lives in the vicinity of the station met with this newsroom to explain what they are facing in the area.

Bora Bora Ibiza Malta was launched on March 31, and since then residents have faced all sorts of inconveniences as such events sometimes last for several days, with the party starting at noon.

“If you’re a student and you come home to study after a day at school, you can’t. If you’re working remotely and you have to have an online meeting, you can’t,” the resident explained, adding that there are days when “you won’t rest in any way, because it feels like that the party takes place inside his residence”.

She pointed out that the resort is right in the middle of a residential neighborhood, with a nursing home and Good Samaritan Hospital just around the corner.

“We’re not against tourism, and there was a hotel with live music just before it was turned into a club,” the resident said. However, a balance was struck in the past, when the music wasn’t so loud, and residents could turn it off by simply closing their windows. Alternatively, one could enjoy the “free” entertainment from their balconies.

Video – [email protected]: A resident walks on Triq il-Kaħli towards Bora Bora Ibiza Malta as music blares through the PA system during the day.

Since April, however, residents of the neighborhood have been subjected to “deafening” music that “shakes your house” and which you can hear clearly in every room of any apartment on the side streets of the station.

Another problem that has been highlighted is that every time they call the police to ask them to intervene, they are asked to come to the police station to file the report.

“Why can’t they come here and measure the sound levels and see for themselves?” she said exasperated.

The festivals held at the clubbing station sometimes take place over several days. Plus, they even start mid-week with music playing from noon until late at night.

“Evil is evil,” fellow resident Anthony Saydon told this newsroom when asked to comment on the situation.

Similarly, another resident who preferred not to be identified said: “We are tired of hearing too much music from my apartment. We cannot rest in the afternoon or at night because it lasts until late.

Another resident, Roger Azzopardi, observed that despite their attempts to go to bed early, some days they cannot sleep. The music, which usually stops at 11 p.m., is unbearable for those who work nights and need to rest during the day. He observed that last week there were times when the music was tolerable, however, last Sunday that was not the case.

“You can’t even rest, you can hear the music in the kitchen,” he added.

A couple aged 50 to 55 who own an apartment in the neighborhood explained that although their property is in a tourist area, they had never experienced such inconvenience before.

“When it was still the San Pawl Hotel, Renato would perform on weekends between 8 and 10 p.m. That was about it,” the resident recalled.

Deafening music from the resort also caused a loss of business as a rental agreement was terminated. Their last tenant was unable to enjoy their rented apartment despite using noise canceling headphones inside the house.

Describing their rental apartment as their investment in life, residents said bad reviews due to amplified music emanating from the resort would be the end of it.

Video – [email protected]: A resident shares a video recorded inside his house, doors and windows closed, capturing the sound of the resort

A woman explained that her 86-year-old father owns a summer residence in the area. In the past, he came and stayed there on weekends, but he doesn’t come anymore due to the unbearable situation.

“Their party is right inside our homes. I don’t understand how the old people’s home and the nearby hospital put up with it,’ the resident said.

“Sometimes I stopped and spoke to the elderly residents outside, who repeatedly complained that they couldn’t enjoy a conversation outside because of the noise.”

The sound level was recorded at 82 dB

The inhabitants have also armed themselves with an application to measure the noise level. According to the screenshots of the results shared with this newsroom, anything from 62dB to 82dB was recorded.

Decibels are the unit of sound measurement, abbreviated as dB. Sounds equal to or less than 70 dB are considered safe for our hearing. This is the sound of a normal conversation between two people. Sounds at 80 or 85 dB will damage hearing over time. It’s the sound of heavy traffic, from inside a car.

The decibel scale is logarithmic. Each 10 point increase in dB is equivalent to a tenfold increase in loudness, which is perceived as twice as loud by humans.

People should be able to enjoy their basic rights – Deputy Mayor

The Deputy Mayor of St Paul’s Bay, Carlos Zarb, stressed that there is little the local council can do as it is not empowered by law.

“A balance is needed,” Zarb stressed, and explained that if he understood that St Paul’s Bay was a tourist destination, it should deprive residents of the enjoyment of their basic rights such as the right to peaceful enjoyment of their property. .

The local mayor, Alfred Grima, confirmed that he had received complaints about the matter and said he had raised the matter with the hotel management and the police.

“Council discussed the matter during the mayor’s routine meetings with the police,” Grima said.

“In my view, any excessive noise that disturbs and annoys third parties or neighbors should never be tolerated,” Grima said, but he also noted that St Paul’s Bay had been a tourist destination for “almost a century”.

He added that the hotel has been around for 40 odd years and has hosted various activities in the past.

“I think the country should seek to analyze the nature of the effect of tourism on residents with a view to finding an adequate balance,” he concluded.

Nationalist local councilor Chris Vella Petroni told this newsroom he had asked the council to discuss the matter. “I sent a message to my colleagues about it,” he said.

Pointing out that he himself lives next to hotels, Vella Petroni pointed out that there is a limit to what one can endure in reference to the Bora Bora Ibiza Malta Clubbing Resort, and said that where he lived, it was far from being like that.

“If it was for me, I would never have given them a permit in the middle of a residential neighborhood,” Vella Petroni said, stressing that he stood with the locals.

In comments to this newsroom, Bencini noted that several residents have to endure “excessive noise” from both entertainment venues and parties held in open public spaces such as along the beach.

“When they [residents] file a report, either there aren’t enough officers at the police station to get there, or they’re going to arrest them. However, this latter scenario is short-lived, as the music picks up after they leave,” Bencini observed.

“It is unacceptable that these residents have to endure sleepless nights due to excessive noise,” he said.

Bencini also called for a review of the law regulating noise.

“Something must be done because it affects people’s quality of life,” concluded the nationalist MP.

Amplified music can be played in a tourist establishment after obtaining a permit from the Malta Tourism Authority. Permit is required to play amplified music, musical instruments and/or use of speakers and/or amplifiers in licensed premises.

BE THE FIRST TO RECEIVE THE LATEST NEWS