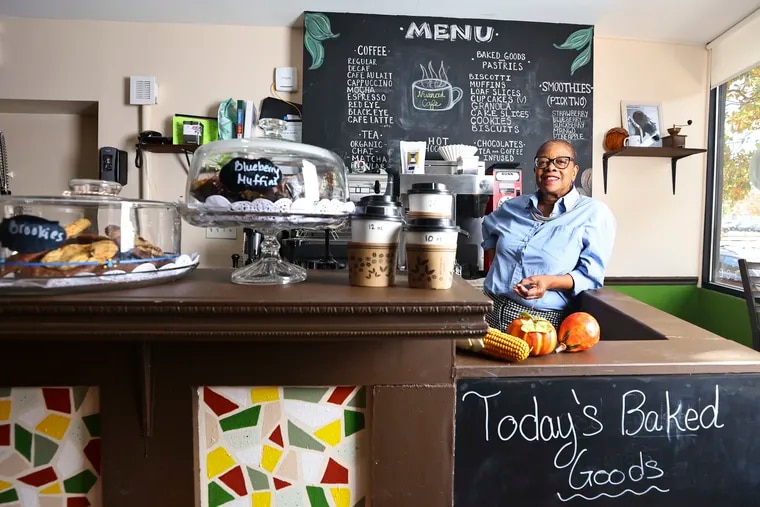 Rosemari Hicks was sure she had found the perfect spot for her independent cafe in early 2020 when she rented a vacant storefront on Camden’s Market Street. An art center and beer garden had previously opened nearby, joining a drugstore and a beloved fried chicken restaurant. She named her company Nuanced coffee because it sits midway between the leafy Cooper-Grant neighborhood, the Rutgers Campus, Camden’s Milk Bottle-shaped City Hall Tower, and the Delaware Riverfront. She liked the friendly, small town feel of the place.

How long Market Street will be able to maintain this sense of neighborhood is now uncertain. To the surprise of traders and residents of Cooper-Grant, the Camden Community Partnership, a development agency formerly known as the Cooper’s Ferry Partnership, has come up with a traffic plan that could make Market Street look and feel more like a freeway than an urban pedestrian spot.

This is not just another story of auto-oriented traffic engineers coming up with misguided street design. The partnership has a close relationship with George E. Norcross, energy broker and director of South Jersey Hospital, who has been a driving force in transforming Camden’s waterfront into a corporate office park and a entertainment district. If implemented, the traffic plan, known as Alternative 7, could reduce the life of Market Street, the last viable downtown commercial corridor in a location that often tops the list of poorest cities in America.

The new traffic pattern would instead favor suburban drivers, making it easier for them to cross the city to get to the white-collar jobs in the offices that now dominate the waterfront – buildings constructed with large grants. fiscal. This is the kind of shot that makes you wonder, who is Camden really for?

Anyone who has followed the The Norcross saga won’t be surprised to learn that Alternative 7 was pulled out of a hat at the last moment, with little public input.

According to Jonathan Latko, president of the Cooper-Grant Neighborhood Association, traders, residents and business leaders had been working with the Partnership for months to develop a $ 10 million traffic plan for Market and Federal streets, the two corridors that run through downtown, connecting the waterfront from Camden Sea to the freeways that lead to the southern suburbs of Jersey. In January, it seemed that the stakeholders had reached a consensus. This plan, called Alternative 5, included measures to slow down traffic on Market Street and make it a more comfortable place to walk and shop.

Latko heard nothing more after that January meeting. Then, in mid-October, he learned that the Partnership was circulating a new traffic plan called Alternative 7. It was eliminating the most important traffic calming measure in Alternative 5: two-way traffic. on Market Street.

Latko discovered the change after Kathy Cullen, project manager for the Partnership, started door-to-door on Market Street, asking traders to sign a letter of support for Alternative 7. Cynthia Primas, who run the IDEA Center for the Arts on Market Street, was stunned by the demand. “She handed me the letter and said, ‘Why don’t you sign it?’ But why would I do it? The idea is to have pedestrian traffic, â€she told me.

“All it’s going to do is make Market Street a race track,” agreed Hicks, when I stopped by his cafe, which is next to the arts center. The cozy space was buzzing with Rutgers students, local residents and Camden County police, drinking roasted Lancaster County coffees and munching on hand-made chocolates from Mecha at Haddonfield.

In between blends of smoothies, Hicks told me she was spending her free time collecting signatures for a petition urging county officials to reject Alternative 7. “she explained.

The proposal is also a surprising return to an older and discredited way of thinking about cities. Today, most downtown traffic plans are aimed at repairing the damage done in the 1960s and 1970s, when the streets of the 19th century were widened to accommodate the automobile. Streets like Market and Federal, which are currently four lanes, were one-way, with lanes of traffic 11 and 12 feet wide. The wide open pavement made them look like freeways and subtly encouraged motorists to drive faster. With little to no on-street parking on some city blocks, motorists have lost the habit of stopping to frequent businesses.

During initial discussions on the new traffic plan, stakeholders agreed Federal Street was a lost cause. Once an eclectic street with a mix of banks, offices and shops, there is no longer a single functional storefront business. But because Market Street still has a critical mass of retail businesses, they felt it could benefit from pedestrian-focused street improvements. All master plan of the city center since 2003 requested two-way traffic on Market Street. It was an opportunity to make it a reality.

â€œI think of us as an early stage Collingswood,â€ Hicks said, referring to the County town of Camden which has used its PATCO stop and pedestrianized main street to turn from awkward to fabulous. Market Street is similarly located between a transit hub and a residential neighborhood. It also boasts an eclectic mix of commercial architecture, such as the magnificent 19th-century building Security Trust Co. on Third Street, not to mention an established clientele of government employees and students.

But judging by how the project engineers spoke about the street at the January stakeholder meeting, you’d hardly know that Market Street was a hallway worth maintaining. HNTB traffic consultant Steve Alpert lamented the â€œvehicle congestionâ€ on Market and Federal streets and noted that it was frustrating for commuters to wait while someone backed up in a parking space.

When you define the problem as traffic congestion, it is natural that you want to resolve the congestion. But too much traffic is not Market Street’s problem. Several years ago, I was pulled over by a Camden Police Officer while standing in the center of Market Street, trying to take a panoramic shot of the Philadelphia skyline. It was late afternoon – what many cities would call rush hour – and I was walking from PATCO station to see the Camden Riversharks playing Campbell’s Field, now demolished. Except on the days when there are big events on the waterfront, you could shoot a cannonball in the street and not hit anyone.

Residents and traders alike have good reason to be wary of county traffic engineers. Not so long ago, Cooper Street, which runs parallel to Market, was modernized. As part of these “improvements”, the traffic lights were fitted with flashing signals that can be turned on during rush hours and major events. Turn signals allow motorists to drive from the water’s edge to the highway without having to stop. But the incessant flow of traffic makes it difficult for pedestrians to cross the street towards the PATCO station, complained Latko. â€œThey’re just trying to move traffic as fast as they can. It is really dangerous.

As Primas noted, what plagues Market Street is the lack of foot traffic. Despite all the new offices being built on the waterfront, despite the beautiful new Rutgers Nursing School and all the new hospital buildings, Market Street traders have not benefited as much as they should from these generously subsidized projects. .

Partnership CEO Kris Kolluri, who previously headed the New Jersey Department of Transportation, insisted in an interview that Alternative 7 is only an option and nothing has been decided. “Our job is to present it [the alternatives] agnostically, â€he said. â€œWe are still in the information gathering phase and we want to give full control over everyone’s point of view. “

There is no doubt that the Partnership has done important community-based work in recent years and has encouraged the creation of new parks. Along with Cooper University Hospital and Rutgers University, he was a major player in the transformation of downtown Camden.

But while the redevelopment has created new jobs and the construction of new mid-rise buildings downtown, it has also wiped out older blocks of buildings where small businesses could gain a foothold in retail. An entire block of stores on Broadway was demolished in 2016 for a medical building. What remains of Camden’s former business district is now surrounded by institutional monocultures: the hospital campus to the south, the university to the east, and the waterfront office and entertainment district in the west. The only space not controlled and programmed by a large institution is Market Street.