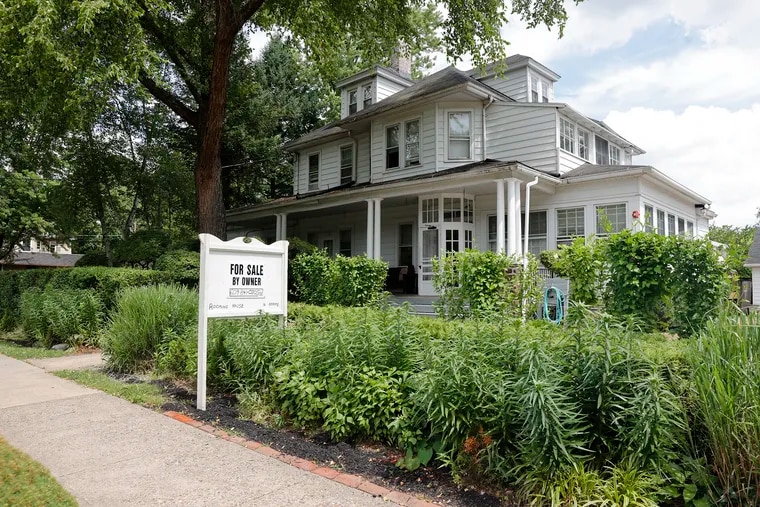 A long-standing rooming house in South Jersey is up for sale, leaving its residents in limbo

A longtime rooming house in the heart of Haddon Heights is on the market, and local residents — including people who call the facility home — are worried about its future.

‘I’d like to see someone buy it and keep it as it is,’ said owner Joseph Duffin, 71, who posted a handwritten ‘for sale’ sign outside his property late last month. on Eighth and Station Avenues. The asking price is $800,000.

Due to his age, Duffin said he was also selling two other rooming houses, one on Park Avenue in Pennsauken and the other on Haddonfield Road in Cherry Hill.

When current resident John Donnelly considered renting a room in the Haddon Heights house, he recalls Duffin telling him to “take the place, you’ll have it forever”.

“But who knows what a [new owner] it’s going to do with that,” said Donnelly, 69, who has lived there for four years.

“I’m sure we’ll get out of here,” he said. “It will show you that nothing lasts forever.”

The house at 802 Station Ave. was built circa 1900 on nearly half an acre of prime land as the private residence of Camden woolen mill magnate J. Walter Levering. By the 1930s it had become known as Haddon Hall Sanatorium for tuberculosis patients, said historian and former Haddon Heights Library director Robert Hunter.

Haddon Hall operated as a retirement home in the 1950s and 1960s and was purchased in 1968 by Theresa Abate, who lived there and rented rooms to single adults. New Jersey licensed the property as a rooming house in 1982, and Duffin purchased it in 1990.

Back then, a single room cost $65 a week or $260 a month. Weekly rentals are no longer offered, and monthly rates now range from $550 to $685 for single rooms with a bed, dresser, microwave, and refrigerator. Bathrooms are shared except in the two conventional one-bedroom apartments in the building. These cost $900 per month. A total of 14 units are available for rental.

“Over the years hundreds of people have lived here,” said Duffin, a father of 11 and grandfather of 10. He grew up the second eldest of 13 children in Haddonfield and named the rooms on Station Avenue after his siblings.

“Some of the people who live here are elderly, some are in pain, some just don’t have family or friends in the area,” Duffin said.

“Some don’t have any problems, except they are poor.”

Rooming houses were once common across the country, especially in urban areas, said housing advocate Alan Mallach, senior fellow at the Center for Community Progress in Flint, Michigan.

“Rooming houses, boarding houses and other SROs (single occupancy buildings) had been an extremely important part of the housing supply in the United States since the 19th century or earlier, but by the 1970s they were disappearing” , did he declare. “That’s a shame.”

Mallach noted that modern zoning codes generally prohibit ORS. Rising property values ​​and redevelopment pressures are also weighing on supply, even amid a homelessness crisis and growing public interest in ‘tiny houses’ and community lifestyles of all kinds. .

Philadelphia City Councilman Derek S. Green introduced a bill that would legalize ORS in all neighborhoods intended for multifamily and commercial uses.

Information on rooming houses statewide was not immediately available, a spokesperson for the state Department of Community Affairs said.

“We’ve lost a lot of rooming houses in New Jersey, and there are people who are going homeless because of a lack of those kinds of options at the very bottom of the housing market,” Adam Gordon said. , Executive Director of the Fair. Share Housing Center, a statewide advocacy organization.

“There is a general shortage of housing, which puts pressure on rents,” he said. “More affordable forms of housing, such as mobile home parks, are being purchased and repurposed for luxury housing.”

Says Duffin: “If we had thousands of rooming houses, we could get the homeless off the streets. We could give them a chance at something.

“I’ve known this house forever for what it is, but it never came on my radar,” Mayor Zachary Houck said.

The lush grounds are well manicured and Duffin keeps the Japanese maples he planted there trimmed like topiaries.

“The landlord obviously cares, and if a new landlord is just as caring, the borough would appreciate it,” Houck said. “We are a community for everyone.”

Hunter, a longtime borough resident, also said he was happy the rooming house was a part of life in the affluent Camden County suburb known for its meticulously maintained homes, wide streets and its abundant greenery.

“When you know people who live in the rooming house,” he said, “it keeps you from just being in the Haddon Heights bubble.”

Station Avenue cafe owner Joseph Gentile, who co-founded Heights in Progress (HIP), the parent of the borough’s Sunday Farmer’s Market, said he “agreed with the house” as she exists.

“But you never know what new management is going to do,” he said.

A retired teacher who lives in Moorestown, Duffin collects vintage furniture – some of which is displayed in his homes – and has turned an ambulance into a “work truck” loaded with tools and supplies for maintaining his properties.

“Haddon Heights has been good to me over the years,” he said. “The officials, the police and especially the neighbors have been very, very nice and tolerant of what sometimes happens.

“We had overdoses here. There is sadness here. When people call it “Heartbreak Hotel” it really explains a lot. »

Robert Everson, 64, who has lived in the Haddon Heights home since 2016, doesn’t mind the Heartbreak Hotel moniker. “I’m on disability, and this is the cheapest place around,” he said.

“I feel good here,” he added. “I hope I can stay until I move into seniors’ accommodation, but there is a six-year wait in this town.

“I am also convinced that something will happen. It always has been.

2022-06-12
Previous Post: Nearly a third of home construction, renovation projects over budget
Next Post: Is debt threatening to ruin your retirement before it begins? 4 tips that can help | Personal finance